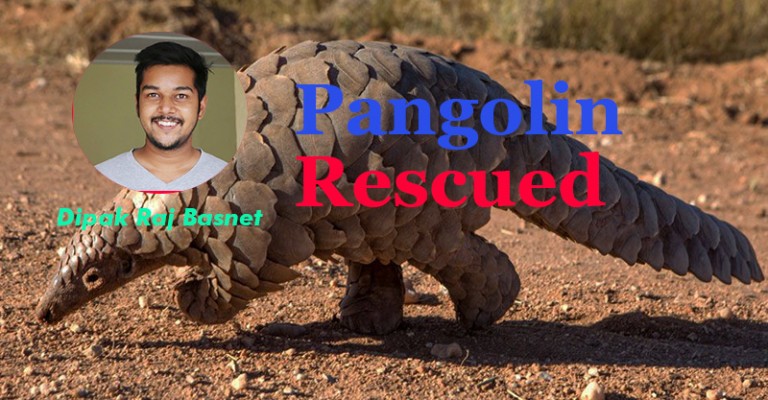 Pangolin is rescued and released to natural habitat in Palung

Eight species of pangolins survive in the wild, among these, two species (Chinese Pangolin Manis pentadactyla (in Nepali Kalo Salak) and Indian Pangolin M. crassicaudata (in Nepali Tame Salak)) are recorded in Nepal. According to Khadga Basnet, there are different local names given depending upon locality and community: People in Terai call them 'Hile Machha' or 'Saal Machhari', 'Kose' by Tamang community, 'Kayanaya' by Newar community, 'Pikichi' by Kirati community and ‘Bhakunde Bhoot” in hilly areas of western Nepal. They are known as 'Padasekh' in Limbu language and 'Pakhe Machho' in Lamjung area.

Local children aged ranged between 13-15 were curious when they first saw the animal crossing the road and started making noise since most of them had not seen the species before and were unaware that it’s a pangolin. On June 28, 2020, 8:15 P.M. there was a phone call from a friend to Dipak Raj Basnet, Wildlife Biologist of Nature Conservation Initiative Nepal (NCI-Nepal) also a local resident of Thaha Municipality-2 to go for observation of unknown species that has been accidentally trapped in local drainage. Following the call, Basnet visited the site along with his friends.

The numbers of local inhabitants were already there. They were trying to move the species with long bamboos and rods. People might have killed the species. Basnet of NCI-Nepal was well aware of handling pangolin and after having a phone call to police, he started rescuing the pangolins with the help of local youths.

After 2 hours of effort, their team was able to rescue the species from the sideway canal of the road under the slab without any injury. Basnet found it to be a critically endangered male Chinese Pangolin. In the process of rescue, he found the local youths to be very curious to know about the species and its handling. The ecological significance of the species was briefly shared with not only those youths but also with the local people resent there.

Basnet assumed that this nocturnal dwelling animal might have come out of the nearby forests and might have missed the way back forests. According to Basnet, including Makawanpur district, National Pangolin Census affirmed from 43 districts of Nepal. He further reported that besides few anecdotal reports on its presence in Thaha Municipality, this species has not been sighted in the northern part of Thaha Municipality- 2 so there is dire need for further investigation of other habitats in the Municipality.

It was almost 10 pm in the night, so Basnet asked police to take care of the species before handing over to the Forest Office. On the next day, the species was handed over to forest officer Krishna Sharma of Sub Division Forest Office, Palung to release the pangolin in its natural habitat then the species was released in the Pataleshwor Community Forest.

According to Sudeep Bhandari, NCI-Nepal Program coordinator, largely desired for the meat and scales Pangolin, often called scaly anteater, are currently the most heavily trafficked mammals in the world and they are highly sought declining from nature. According to the Central Investigation Bureau of the Nepal Police, Nepal police has arrested 56 smugglers and confiscated 223.5 kg of scales, 4 live one carcass and 7 set of pangolin skin in the past five years in past 5 years as of 2019.

Badri Baral, a wildlife biologist from Nepal Environment Research Institute(NERI) urge for the community-based conservation efforts in Thaha Municipality to yield a high conservation eﬀect to achieve Pangolin Conservation Action Plan (2018-2022)’s the aim of securing pangolins population against emerging threats and recovering in the wild through a holistic approach of conservation including research, awareness and local stewardship.

Baral further highlighted capacity building training about pangolin monitoring techniques to develop local citizen scientists on enhancing understanding and knowledge on conservation status, ecology and habitat dynamics of pangolins to foster the conservation impact by considering pangolin as a flagship species in the region. So, Baral spotlighted the role of Thaha Municipality, District Forests Office, local communities and other national and international conservation institution in designing bottom-up approach of pangolin conservation interventions that incorporates priority actions to address threats of pangolins.

Chinese the pangolin has been classified as critically endangered and Indian pangolin is classified as endangered species by the international union for conservation of nature (IUCN) red list category. Both Indian and chinse pangolin are protected species in Nepal and are listed in schedule I which also includes Tiger, rhino, bear, musk deer, and red panda, of a national park and wildlife conservation act 1973, as well as in appendix I of the Convention on International Trade in Endangered Wild Fauna and Flora (CITES).

The National Park and Wildlife Conservation Act has provisions ‘of a fine ranging from NPR 500,000 to NPR 1,000,000, or imprisonment ranging from five years to 15, or both, for offenders and accomplices convicted for illegal trade in pangolins’ body parts.

World Pangolin Day is celebrated on the third Saturday in February, and this year, the special day falls on February 15, 2020. World Pangolin Day is an opportunity for pangolin enthusiasts to join together in raising awareness about these unique mammals and their plight. So, Thaha Municipality has identified its beauty to be a prime habitat of pangolin to join hand in hand for pangolin conservation.