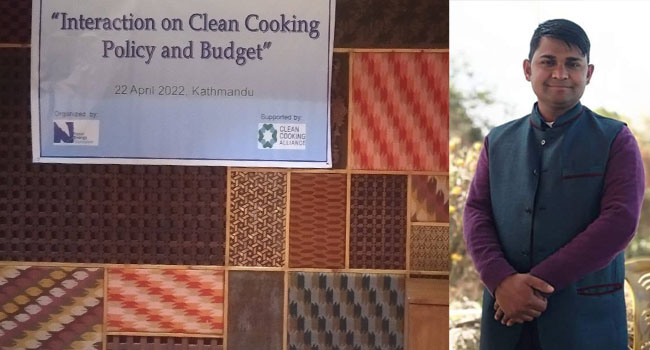 Challenges and opportunities on adoption of electric cooking system In Nepal

As the impact of climate change is increasing day by day adversely in the world. We need to be aware of its effect on human life and the environment. The Paris Agreement, in 2015, set a goal to limit global warming to well below 2 Celsius, for this goal all participants’ countries should set a plan to cut greenhouse gasses emission and adapt to climate change impacts in the form of Nationally Determined Contribution (NDC).

Nepal, which is among the most vulnerable countries to climate change, is at high-risk due to the country’s fragile topography, the climate-sensitive livelihoods of the people and their limited adaptive capacity. The best solution and plan for mitigating this impact is the adoption of e-cooking energy in each household of Nepal. As the electricity producing capacity of Nepal is rapidly growing and it is assumed that by the end of 2030 the energy generation of Nepal will be approximately from 1400MW to 15000MW which may be from either from Nepal Electricity Authority, Mini and  micro hydro and community based distribution system. Standing on this fact we have to control each activity responsible for creating pollution.

Among the various sources of pollution, the kitchen is also directly considered as a major source of pollution in Nepal. More than 70 % of remote village people use traditional cooking patterns in their households which create pollution in the kitchen and home environment. Although most of the people are aware about the adverse effect caused by it, they are also compelled to use it because of no proper alternative available for them especially in the rural belt of Nepal. The clean cooking concept has been raised everywhere from national and international level but due to various barriers it has been difficult to adopt with long term sustainability. In Nepal LPG gas has been used as most relevant clean cooking means in most urban belt of Nepal and on some sub urban area but due to difficult geographical tertian  in rural areas of Nepal it has been difficult to adopt it due to its high price, transportation difficulties from one place to another, not reliable supply, dependency on other country and high risk for its use. For its appropriate alternative, electric cooking can be the best solution in the remote belt of Nepal to get rid of traditional cooking barriers and LPG barriers.

The concept of electric cooking is one of the best solutions of the country for both urban or rural parts of Nepal and needs  to be timely initiated from all places of Nepal to get merits like time saving,  money saving, adoption and promotion of new technology, balance foreign trade and promote national resources. Though the adoption procedure seems to be realistic in urban areas of Nepal, there are high challenges for adoption of this technology unless concerned authority does not address the following barriers for easy adoption of this new technology in rural areas of Nepal which may be from both grid and off grid connection.

Challenges  of adoption of electric cooking system in Nepal

The e-cooking is emerging technology in Nepal which have several aspect of advantages but also due to some reason which is very harder to adopt with challenges like rural household wiring and capacity installed needs to be improved, the tariff of electricity needs to be affordable to all village people as per their economy, needs to give subsidy from government agencies for the initial phase of implementation, needs to raise a rapid awareness program on the rural belt about its advantage and operation procedure, the technology of e- cooking should be risk free and user friendly, the standard of technology should be improved as per the necessity of Nepalese kitchen context , government should gradually plan to stop importing LPG gasses and give more emphasis on electric cooking promotion in all areas of Nepal, Nepal Electricity Authority (NEA), Local Mini and Micro Hydro power plant, Community Rural Electrification organization should provide regular and reliable supply of electricity service to each household maintaining stable voltage, local governments should plan for promotion of e-cooking with planning budget and effective implementation plan.

Opportunities for adoption of E-cooking system in  Nepal

Although there are lots of challenges for adoption of electric cooking system in all areas of Nepal it also has lots of opportunities for its adoption like skill transformation for creating employment opportunities to people, reduction in degradation of forest and protect green vegetation, improvement of health of village people, basically women, time saving for cooking which can be utilized for other productive sectors contribution to Nationally Determined Contribution (NDC) to meet its objective for ensuring 25 % of the people of Nepal uses this source as a major source of cooking energy by 2030,after the adoption of this technology dependency of LPG gas will be reduced which will support the trade balance of the nation, contribution for climate change effect habituated with new technology to get rid from traditional cooking hassle, social and economic benefit from promotion of this new technology.