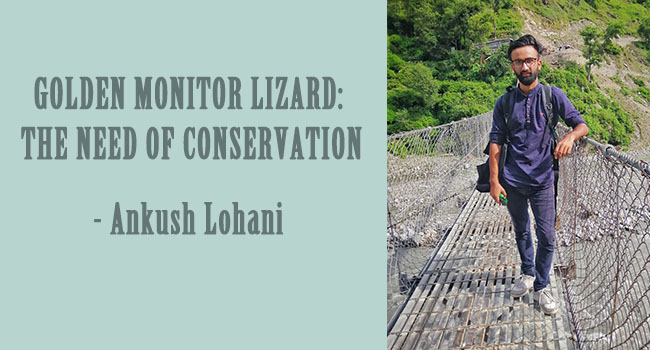 Considering the fact that the majority of the research work in Nepal is highly concentrated on large mammalian species, limited priority has been given to the study of other wild lives though they are also important for the smooth functioning of the ecosystem. Herpetofauna (Amphibians and reptiles) has been getting the least importance resulting in a lag of adequate data to access the ecological and conservation status of any herpetofauna species.

Among all the herpetofauna species, one of the most poorly studied species of reptiles in Nepal and over all south Asia is the golden monitor lizard or the yellow monitor (Varanus flavescens). They are medium sized monitor lizard measuring up to 90 cm in length and with light brown and yellow colored scales throughout the body.  They are a carnivore poikilothermic reptile and are commonly called as “Sun Gohoro” (सुन गोहोरो) in Nepali language.

The golden monitor lizard or the yellow monitor is native to south Asia with their major home range lying in northern part of India and southern Nepal along with Bhutan, Pakistan and Bangladesh. They generally prefer grasses, swampy lands and agricultural field as their primary habitat. According to a survey by Visser in 2004, it has been found that the distribution pattern of yellow monitor mainly follows the major river systems of the Indus, Ganges and Brahmaputra.

In past the golden monitors were placed under least concern(LC) in IUCN red list book but with decreasing number and a large decline in their population, they have been placed under Endangered(En). IUCN states that in Past 20 years the population of yellow monitor lizard has declined by 50 to 60% within their habitat range.

These species are among the most traded species throughout the south Asia for which they are placed under Appendix I of Convention on International Trade in Endangered Species of wild flora and fauna (CITES). In Nepal these species are protected under national park and wildlife conservation act 1973.

In recent times, some strict rules have been implemented in order to try and control the trade of these species. The practice includes 10 years of jail or 75000 fine or both if found being involved in trading of these species or their parts.

To begin with, rapid decline in the population of the golden monitor, the existence of these species has been in great threat. The urbanization and rapid commercial development along with human encroachment has led to the loss in habitat of these species which stands as one of the major threat to their population. Heavy use of insecticides and pesticides in the cultivated field has also resulted in death of a lot of them. In addition to this, other anthropogenic or human induced threats are also major in aiding to reduction of the species number. People are found killing these species for their meat which is considered to be good source of energy and for the trade of their skin. Along with this, killing of this animal for recreation has also been found to be common among people. To add to this, retaliatory killing is also common as these species are falsely regarded as poisonous and also they feed on the fishes of people's fish farm resulting in killing of numerous individual of these species.  In recent times, road kill has also been a major threat to these species.

The negative perception towards small reptiles has always been a threat to their existence. With rapid decline rate in individual, the golden monitor lizard is not far from being into the verge of extinction. Though being declared as priority protected species, people are unaware about their legal status and importance. Hence, changing the perception of the people towards these species with awareness campaigns and bringing community together in conservation can help find the gap and heal the declining status of Golden Monitor Lizard.